Antony Hamilton trained in dance in Sydney, Perth and New York. Since 1999 he has worked extensively with Australia Dance Theatre, Kage Physical Theatre, Chunky Move and Lucy Guerin Inc, performing throughout Australia and overseas. As a choreographer, he has been commissioned to make work for Chunky Move, Dancenorth, Victorian College of the Arts, Stompin’ and Rogue. Hamilton was awarded the inaugural Russell Page Fellowship in 2004 and the inaugural Tanja Liedtke Fellowship in 2009, in 2005 he won the Green Room Award for Best Male Dancer and his short work The Counting was also nominated for Best Original Choreography. In 2009, Blazeblue Oneline took out two Greenroom Awards, from its four nominations, winning awards for Concept and Realisation and Set and/or Costume Design for Dance. back 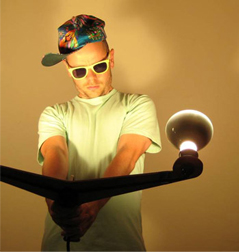