Clouds above Berlin is a double bill of two works, one – Black Project 1 by Antony Hamilton (2009 Tanja Liedtke Fellow) and the other – Tilted Fawn – by Melanie Lane. Hamilton’s work Black Project 1 was initially developed during his Fellowship program in Berlin in 2009. The fully produced work was premièred in Melbourne earlier this year and we congratulate both Antony and Melanie (his artistic collaborator) on their ongoing success with these works. 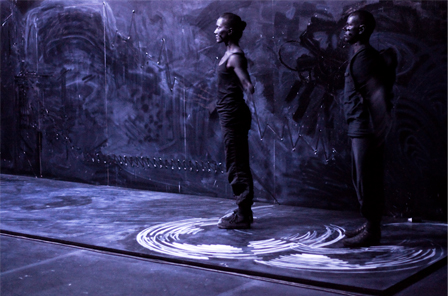 Melanie Lane and Antony Hamilton, Black Project 1.
Photo by A Zuckrow from the first development in Berlin 2009.