TLF in partnership with International Competition for Choreographers, Hanover, Germany 2016 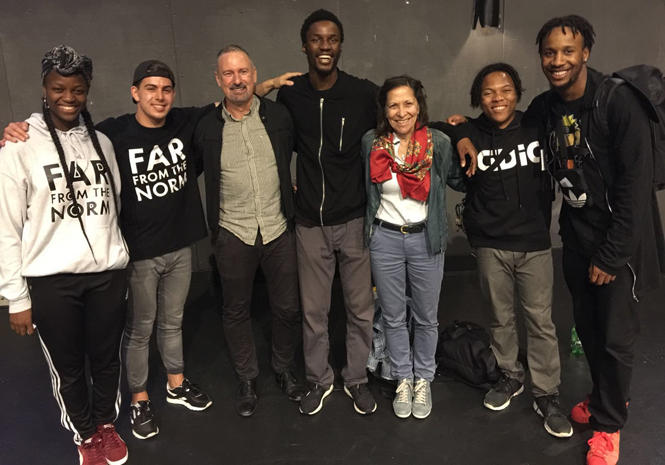 The dancers  of „60 sec“, Garry Stewart,Director of ADT and Gerlinde Liedtke

This prominent international competition has been produced by the Ballet Society Hannover for the past 30 years, and in that time it has become an very important event on the contemporary dance scene, with around 160 choreographers from 45 nations applying to participate.

The aim of the competition is to provide a platform for young choreographers to present their work in an international context to a jury of renowned choreographers and directors. Seven of the jury members this year were former participants in this unique competition.

On the occasion of the 30th anniversary of the Hanover competition, the Tanja Liedtke Foundation has donated a scholarship to an individual dancer to travel to Australian Dance Theatre (ADT) in Adelaide, Australia to work with the company and its Artistic Director/Choreographer Garry Stewart. The scholarship was awarded by Mr Stewart to Botis Seva from Great Britain. Botis’ work titled 60 sec was also awarded first prize in the competition overall as well as the audience prize. Botis’ Tanja Liedtke Foundation scholarship includes return travel to Adelaide and accommodation, as well as the ADT placement. We wish Botis all the best for his trip to Australia and we hope he enjoys his time with ADT.

Full list of winners of the International Competition for Choreographers Hannover 2016 are:

The Tanja Liedtke Foundation is proud to be supporting Hanover Ballet Society’s  30th anniversary of their annual International Competition for Choreographers.

As a special prize in this year’s competition, one young artist will be awarded a three week secondment placement with Australian Dance Theatre, based in Adelaide, Australia. The prize will be awarded by ADT’s Artistic Director Garry Stewart who is one of the judges in this years competition. Through funding from TLF, the successful awardee will receive return travel to Adelaide, accommodation and will be able to train with the company.

Tanja Liedtke was a former dancer with ADT in the late 90s and early 2000s, and was given several opportunities to develop her early choreography for dancers of the company.

Each year, the Hannover competition receives approximately 160 applications from artists in over 45 different countries, and the event has developed significant prestige in the world of contemporary dance in Europe.

Applications close on 15 April and the finals are held on 11 and 12 June this year.