He told the audience that “Road” is about his journey with his father, who helped him to find his way through life and the piece is therefore dedicated to the many orphans in South Africa, who don’t have parents to guide them.
Helmut Jochum, from Balettgesellschaft and Garry thanked the Foundation for supporting this residency. “It’s such an amazing opportunity for someone like Oscar”. 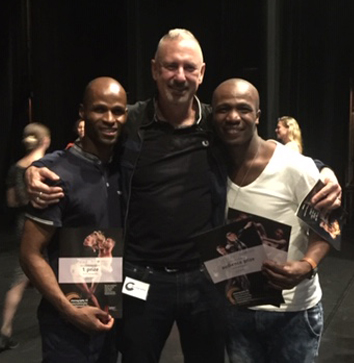 Winner of The 33.Choreography Competition is Oscar Buthelezi left of Garry Stewart from ADT,Photo: Garry Stewart