Tanja was commissioned to create Imploded by David Hughes in 2007, and it had its premiere in Edinburgh on the same date as construct premiered in London – 17 May 2007. Imploded: Une reverie romantique has been performed and toured by David Hughes Dance since it was first created. We are very pleased to be able to support the presentation of this work. 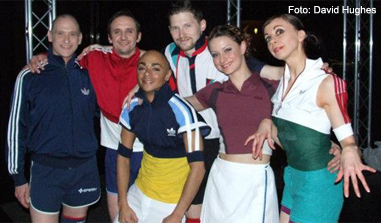 Imploded continues to tour by David Hughes Dance in UK and Europe:

2015 performances will take place at the Theatre Im Pfalzbau, in Ludwigshafen, Germany on Tuesday 24 March at 7.30pm and at Stadttheatre Aschaffenburg, Germany on Friday 19 April at 7.30pm in the Großes Haus.

The work has been toured by David Hughes Dance annually since 2012.

In 2014 the work was performed in February as part of British Edition (a showcase platform for British contemporary dance) and in Wolfsburg and Villingen/Schweningen, Germany in March as part of David Hughes Dance touring program.

In November 2014, the work was presented in Zug, Switzerland as well as Leverkusen and Aschaffenburg in Germany.

The work was also performed in 2013 in Scotland and Germany (Schweinfurt, Meppen and Erfurt) and in 2012 in Ludwigshafen and Saarlouis (Germany).